Azure falls under the huge blue umbrella on the color wheel. Blue remains one of the most popular colors in the world. Let us delve a bit more into this fascinating color so that when questions arise, such as what color is azure, we can answer with confidence. We will talk about the azure blue color code and the different shades of azure. Wouldn’t it be exciting to tell your guests that you have painted a room in azure blue colors? That should get them talking.

What Color Is Azure Blue? How to Make the Azure Color

Azure is a tertiary color, meaning it is a mix of a primary and secondary color. It is a bright blue color and just like most other blue colors, it has a calming effect. Here are a few steps to follow when making up your own azure blue color. Mix blue and green together, which will give you a cyan color, then by adding more blue, you will soon get closer to the azure blue. The word Azure was adopted into English from the French and was first recorded as a name of a color in 1374 by Geoffrey Chaucer who referred to a brooch as having the colors of gold and azure “Asure”. Azure blue is a very intense shade of blue. It is located between blue and the cyan color on the color wheel. Azure is the color often associated with the blue tone of the sea and ocean.

Azure is derived from a precious stone called Lapiz Lazuli. The stone is the rarest of all the precious blue stones and can be found in Badakhshan in Afghanistan. The gemstones have various shades of azure colors, ranging from dark azure blue to light blue. Scholars from ancient times believed that the rare azure stone carried mystical powers. As such, the headpieces of Pharaoh Tutankhamun and his tomb reflect the azure blue color. It is also believed that Cleopatra was drawn to the shades of azure and used it regularly as an eyeshadow. Just as those from ancient civilizations appreciated this beautiful color, so did many artists and painters. Here are a couple of examples of artworks incorporating this stunning blue hue.

Self Portrait (1889) by Vincent van Gogh

One of the true masters in paint was Vincent van Gogh, and he used a combination of azure blue to depict his sky themes and added green tones to his paintings to represent the land on a summer’s day. One of the more famous paintings using the azure blue color by Van Gogh was titled Self Portrait (1889).

The artist Yves Klein was French by birth and became the renowned founder of the Nouveau Realisme Movement, which produces conceptual art using Abstract painting. Klein became famous for developing art pieces in vivid blue colors, ranging from light azure blue colors to dark azure blue colors as well as other tones of blue. As both a painter and sculptor, his masterpieces reflected his religious and spiritual upbringing. One of Klein’s sculpture pieces, titled Blue Earth, was created in 1957. He declared that the whole world was blue at that time and subsequently, all his art pieces were completed only with the blue color.

Due to the popularity of his work in blue, replicas have been made and can be seen in high-end home décor settings. The different shades of blue color have become synonymous with Klein. He wanted to achieve his dream of painting the world blue, and he also wanted to ignite more passion in the abstract world of painting. His legacy remains an inspiration for all young and upcoming artists, showcasing his love of this color in his paintings and sculptures.

The Various Shades of Azure A much lighter shade of azure, this pale cyan-blue color reminds us of the ocean mist. If the traditional azure-blue color is too bright for your liking, azure mist could be the perfect option. The sky-blue color was first recorded as an official color name in 1728 but before that, it was referenced as a color in 1585 where it was featured in a book by Nicolas de Nicolay who described the “skie” color. Baby blue and sky blue are very similar to each other as they both carry similar undertones. The color “true blue” carries a deeper tone of azure. The uniforms of the sports team of UCLA are made from this color and it is also one of the blue shades that you will see being used by the Los Angeles Chargers, who refer to the color as power blue.

This shade of azure is also known as “glas celtig” in Welsh. The tone of the color is described as being almost water-like or a color that resembles glass. The Celtic blue color is a very vivid blue and is quite bright.

What Colors Go With Azure Blue?

The complementary color for azure blue and the different shades of azure would be an orange shade such as coquelicot. Because there are so many shades of blue, if you want to incorporate dark blue into a home, you need to be a bit wary because blue tones added to a room where there is no direct sunlight can make the room appear gloomy and uninviting. All blue colors thrive in natural light, so if you have many windows in your living room, incorporating pops of dark azure blue hues and shades of azure, such as azure mist and sky blue, will give you a calm and serene feel when walking into the room. Azure blue is so inviting that you can even consider painting more than one wall without feeling the room closing in on you.

Strangely enough, azure blue is such a versatile color that it will be best displayed if the walls are painted in smaller living spaces of the house. Dark blues should be avoided when painting large surfaces. If you paint an entire room in azure blue colors, then accenting pieces in dark blue should be your contrasting color which will be pleasing to the eye. Navy or midnight blue and azure blue will add a touch of warmth to the room, but at the same time, the space will maintain its size and won’t feel claustrophobic.

If you happen to walk into any casino around the world, you would have noticed that the ceilings of the casinos are painted to resemble the blue sky. Casinos use shades of blue to give the impression that it is still daylight so patrons can stay longer at the tables. All shades of azure blue can easily be incorporated into bathrooms as they will be the contrasting color in a cream, buff, or even dim-gray space. Many relaxing baths can be taken in a bathroom that reflects this beautiful color in accent pieces such as in your towels, face cloths, and art.

When we talk about the color blue, we imagine the sea and the beautiful blue sky. We bet that the next time you are with a group of friends and ask them to picture the color blue in their minds, they will all come up with a different answer. When we talk about the azure blue color, however, and when it is explained in more detail, everybody is on the same page. What you have now is the advantage of knowing precisely what shade of blue the azure blue color is on the color wheel, and this knowledge should surely put you one step ahead of the crowd. What Is the Azure Color Code?

What Color Is Azure?

You can be assured that when asking what color is azure, the correct answer is easily explained as the color of the sky or the deep blue ocean. These colors are what are referred to as different shades of azure. The azure blue color is a cross between blue and cyan but is just a little lighter than dark blue. Welcome to the wonderful world of pastel colors! These lovely hues are tints of a lighter and softer shade of each color on the color wheel. In other words, pastel colors are just muted, paler, and softer versions of the brighter and more vibrant colors we use every day! While we may not realize… What color is magenta? There are a few variations to its description, but it has been defined as a reddish-purple or purplish-red. Magenta has also been described as part of the pink and violet family. In this article, we will try to clarify what two colors make magenta if there are any, and how… The rose gold color can be described as having a touch of class with a bit of mystique and a hint of royalty. The rose gold color palette has become exceptionally popular over the last few years. Noticeably, the fashion industry has introduced what we like to refer to as a regal color, to… As with all colors, there are so many different types of red from light and dark red to more descriptive names like cherry red or wine red. All these variations of red color can almost seem infinite. However, do all these colors come entirely from red? Since many of us see colors differently, there… Green is the color of nature, rebirth, and life. Green has been synonymous with calm and serenity since the dawn of time and will remain a popular color for centuries. When taking a walk to the beach, you are surrounded by nature in all its glory, and while the blue of the sea may… Vibrant colors are attractive and eye-catching; however, they can be used a lot more effectively when combined with muted tones. Bright colors draw your attention, but if used excessively, they can become uncomfortable to look at. Even though more vibrant colors have their place, so do muted colors, which have a more subtle and… 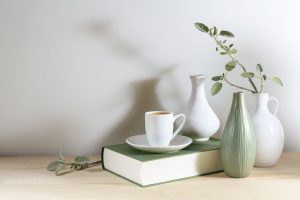